Should I have my dog spayed? 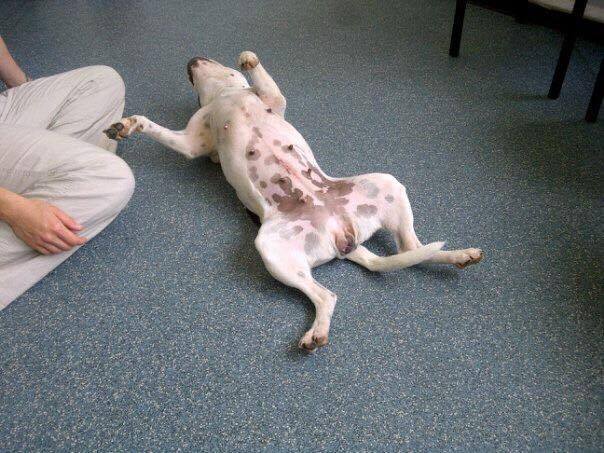 Should I neuter my bitch?
Dr Marianne Thomas BVSc MRCVS, answers your questions to help you make this important decision. Marianne has worked as a small animal vet in the UK for 7 years, and now runs Dog First Aid Oxfordshire, where she teaches canine professionals & pet parents life-saving skills, with the aid of her Parson Terriers, Possum & Wombat.

How is long-term health affected by neutering?

The quick answer is that life expectancy is longer in neutered bitches, irrespective of owner’s funds. A study of 80,000 dogs, found that neutering increased life expectancy by 26% in females. Overall, average life expectancy was 7.9 years if un-neutered, 9.4 years if neutered.

Un-neutered animals have weaker immune systems because of their hormones, and are more likely to get injured, because of straying.

My friend’s bichon, Caramel, regularly escaped from the garden. She had 2 unplanned pregnancies, and was killed by a car at 5 years old. They had their second dog, Caramel2 (!), neutered. Here she is still going strong at 18. 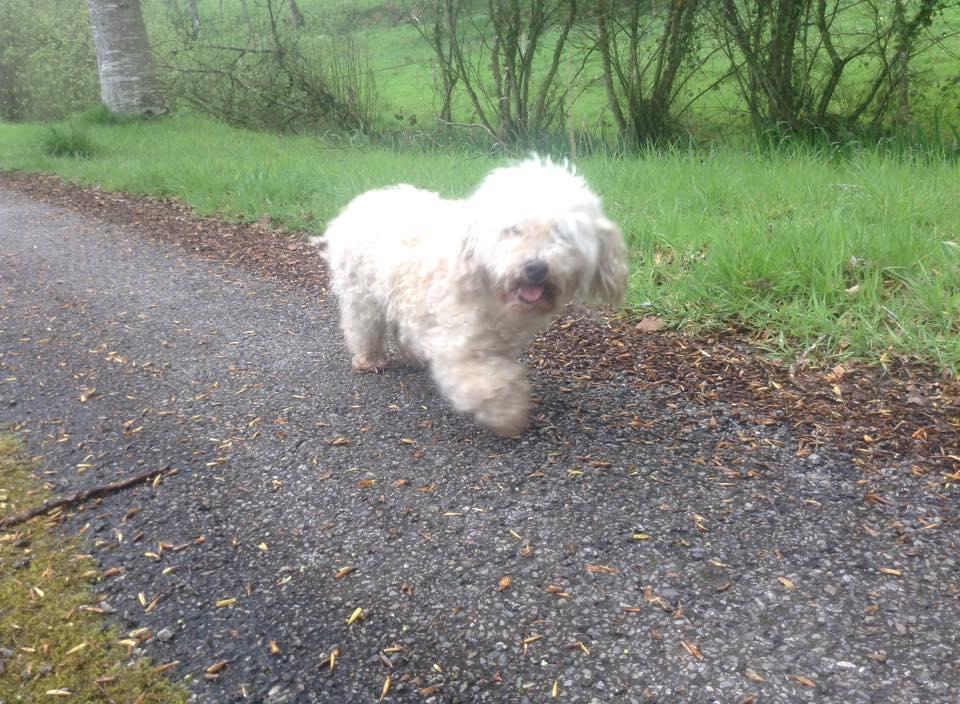 Living longer means neutered bitches are likelier to live long enough to get cancer, but in some cases cancer risk is higher irrespective of age. This doesn’t affect all breeds equally – spaying a golden retriever (at any age) increases her risk of lymphosarcoma by 3-4 times, while spaying a Labrador barely increases this risk at all!

What about other illnesses?

Pyometra (or pyo for short) is a life-threatening infection of the uterus (womb). 3-6 weeks after a season, ovarian hormones can cause cysts in the uterus. Bacteria enter the open cervix (even if she hasn’t mated) and the uterus fills with pus. A high fever develops and she becomes terribly dehydrated, slipping into toxic shock. She’ll often vomit uncontrollably and become lifeless. She’ll need to be stabilised on a drip, then have emergency surgery. The uterus is often brown and can fill most of her abdomen! The surgery has risks – pus can escape into the abdomen, the uterus can even burst before surgery. Not all survive, and most spend several days in hospital. Pyo is more common in older bitches. Some have other health conditions, increasing the anaesthetic risk. 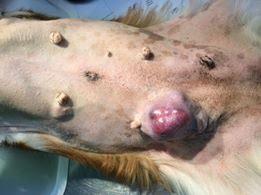 As you can probably tell, I’m generally pro spaying, unless a bitch is for breeding, but I’m here to give a balanced view. This is your decision, not mine.

Some conditions are m o r e common in spayed bitches. In retrievers neutered before 6 months old, these include cruciate ligament disease (causing a common, very painful knee injury), and hip dysplasia. Most vets recommend neutering after she’s “skeletally mature” (fully grown). This is most important in larger breeds, as they’re prone to these conditions, heavier, and grow slowly.

What are the different types of spay surgeries?

Ovariohysterectomy (OHE) or oophorectomy (OOP) are both done under general anaesthetic, and the incision is usually made along the middle of the tummy. In OHE, both ovaries and the uterus are removed. In OOP, only the ovaries are removed, provided the uterus looks normal. Scientists used to think OHE was necessary to prevent pyometra. We now know that without ovaries, pyometra can’t happen.

In keyhole surgery, or laparoscopic “lap” spay, 3 small incisions are made and the tools and a camera passed through, to perform OOP. Electrocautery on the cutting tool closes blood vessels whilst cutting. Most bitches seem to bounce back quicker, and the smaller incision reduces the post-op complication risk, so it’s great for an energetic young bitch. That said, if bleeding occurs, you have to open up the abdomen, which takes time. It’s not necessarily less painful or quicker than an open spay, and it typically costs 2-3 times as much.

I used an open spay when spaying my own laid-back bitch, Pippo. This was her that afternoon, about 90 minutes after being spayed (the towel was for warmth, honest!) 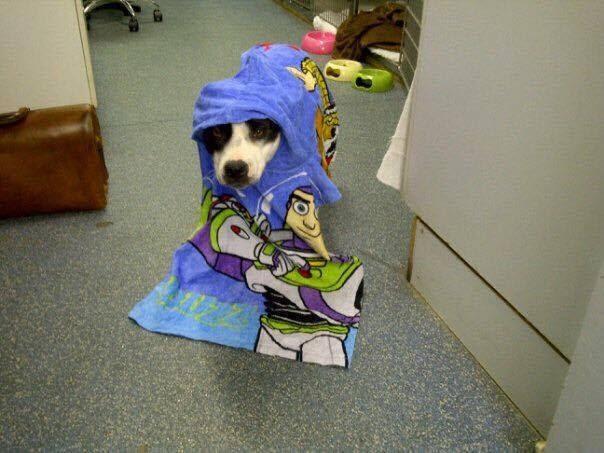 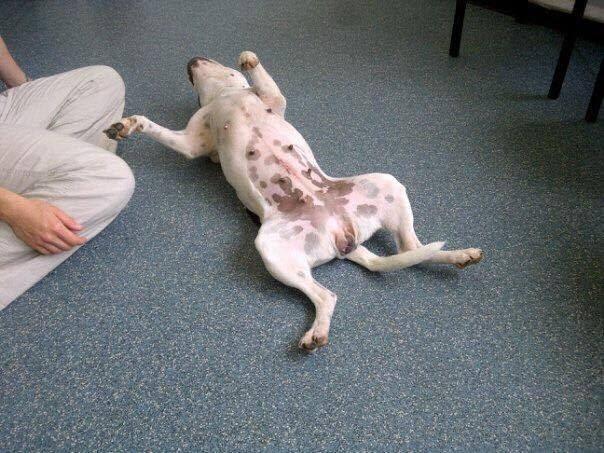 What is an ovary-sparing spay?

In this American surgery, the womb is removed, but at least 1 ovary is left in. This prevents pregnancy, reduces the risk of some cancers, increases the risk of other cancers and of infection. Although her quality of life will benefit from being able to run off lead even when in season, I struggle to justify putting her through surgery for no decent health benefits, and my UK colleagues seem to feel the same way.

Can I have her medically sterilised instead?

It’s done in working dogs sometimes where there’s the intention of breeding them in the future, but I wouldn’t use it on a pet. The drugs used can have side effects, are costly, only last a few months, and you don’t get the health benefits of surgical spay.

Lowri is only used for light work. Spaying hasn’t slowed her down a bit! 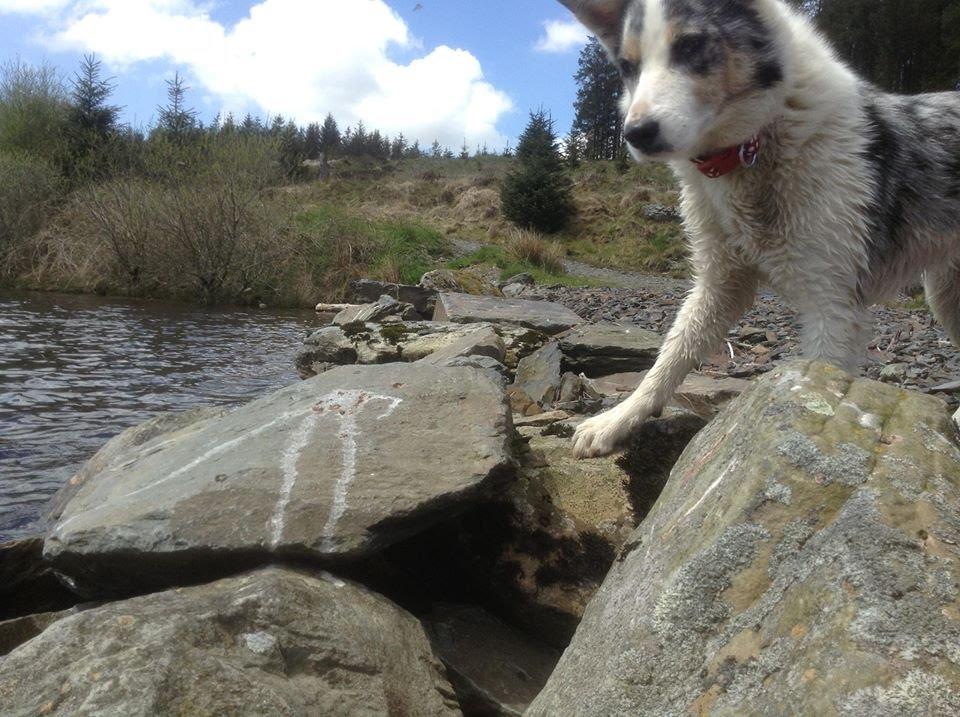 I heard vets are now neutering dogs as young as 6 weeks old. Why is this? Is it safe?

It’s common at shelters in the USA and Australia.

Puppies are easier to rehome. Rehoming un-neutered puppies means asking new owners to sign a contract promising to neuter. This often isn’t enforceable, and takes up precious resources. Neutering before rehoming reassures the charity that they won’t be producing more unwanted puppies.

I worry about early-age neutering because of long-term risks of joint disease. The surgical risk is much lower than in a large adult bitch, because everything’s smaller and easier to see. The anaesthetic risk is slightly higher because the vital organs aren’t as developed, and there’s a higher risk of hypothermia.

At around 6-12weeks old, puppies get to know the world during the socialisation window. It is vital that they have as many positive experiences as possible.  Neutering at this age risks seriously harming a pup’s emotional development. I could never recommend it for a pet.

In a shelter environment, it’s a compromise I can understand, but I think long-term it’s a mistake.

If I decide to have my bitch neutered after her first season, how can I keep her safe during her season?

A bitch’s first season can be a nervous time for new pet parents. First, the good news – pyometra almost never happens at this young age. Don’t let her go swimming though, as her cervix will be open.

Now the bad news – false pregnancy is common after the first season. In most cases, this condition (where the body goes through the motions of pregnancy, for the full 2 months) runs its course without issue, but some bitches lose their appetite, become depressed or even aggressive. Treatment is available if needs be.

The most important thing is for her not to get mated by a dog. Teen pregnancy can be very dangerous for mum. She’ll usually be at her most fertile when the vaginal discharge just starts to run clear, and for the following few days. To be extra safe, keep her on lead from when the bleeding starts, until 2 weeks after you stop seeing blood.

And don’t use those doggy period panties. The lack of ventilation can cause infections, plus they look silly ????

Take your time to decide. If your dog gets a bit shy, hold off on the neutering. It’s never too late to neuter.