Should I have him neutered? 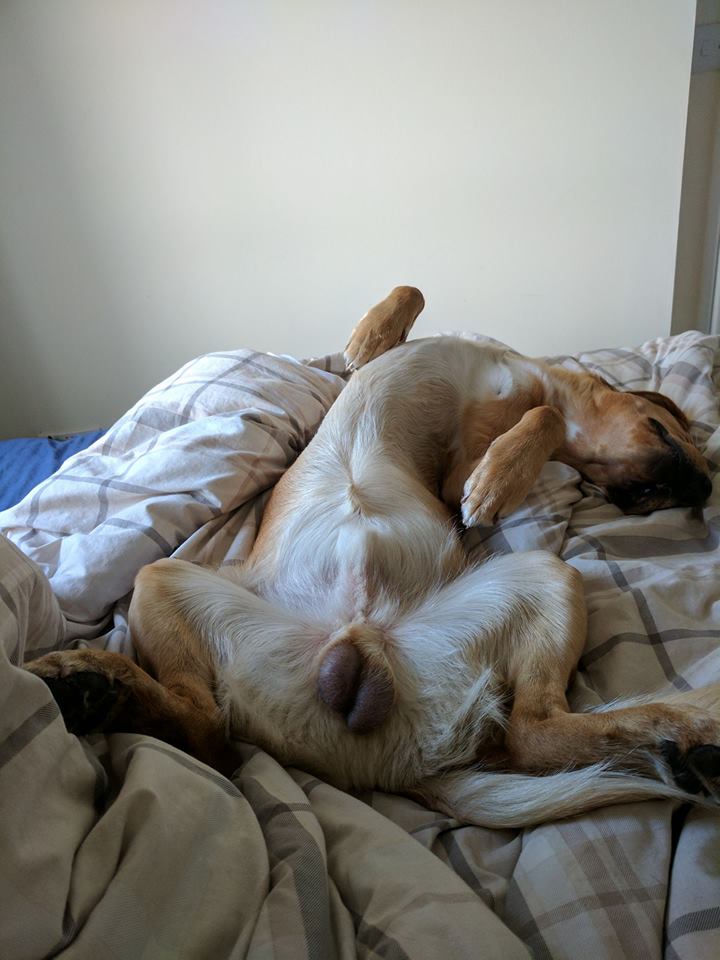 Should I neuter my dog?
Dr Marianne Thomas BVSc MRCVS, answers your questions to help you make this important decision.

Marianne has worked as a small animal vet in the UK for 7 years, and now runs Dog First Aid Oxfordshire, where she teaches canine professionals & pet parents life-saving skills, with the aid of her Parson Terriers, Possum & Wombat

What are the health benefits & drawbacks of neutering males?

At 13, Eddie the neutered German Short Haired Pointer is still a picture of perfect health! 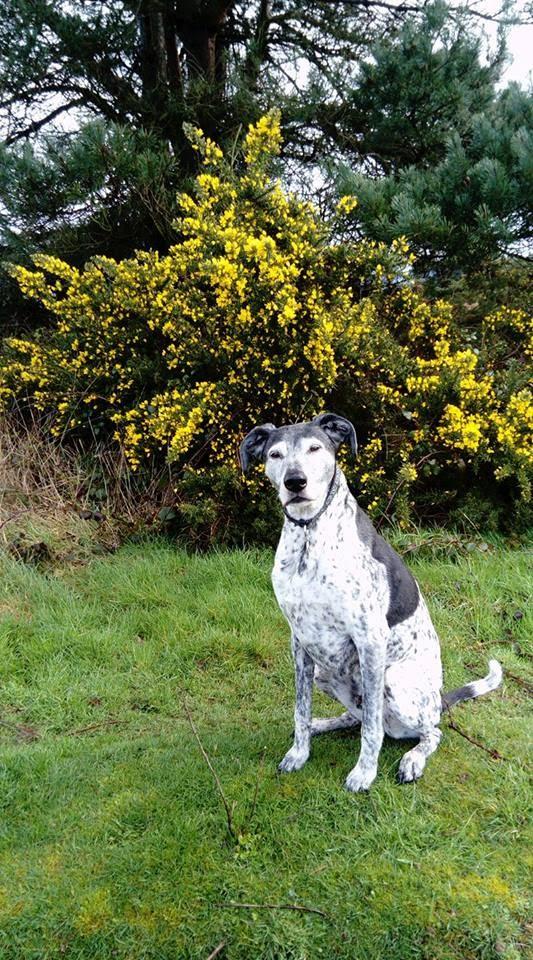 Neutering reduces the risk of some cancers (you can’t get testicular cancer if you don’t have testicles! Aggressive peri-anal cancers are also much less likely). Though some cancers like lymphoma are commoner if neutered, so overall the risk/benefit on this front seems to be a draw. However, if a dog is “cryptorchid”- meaning one or both testicles hasn’t descended properly, the testicular cancer risk is very high and neutering is always recommended.

These testicles were removed from a 10 year old rescued westie. The one on the right is normal, the other was retained. 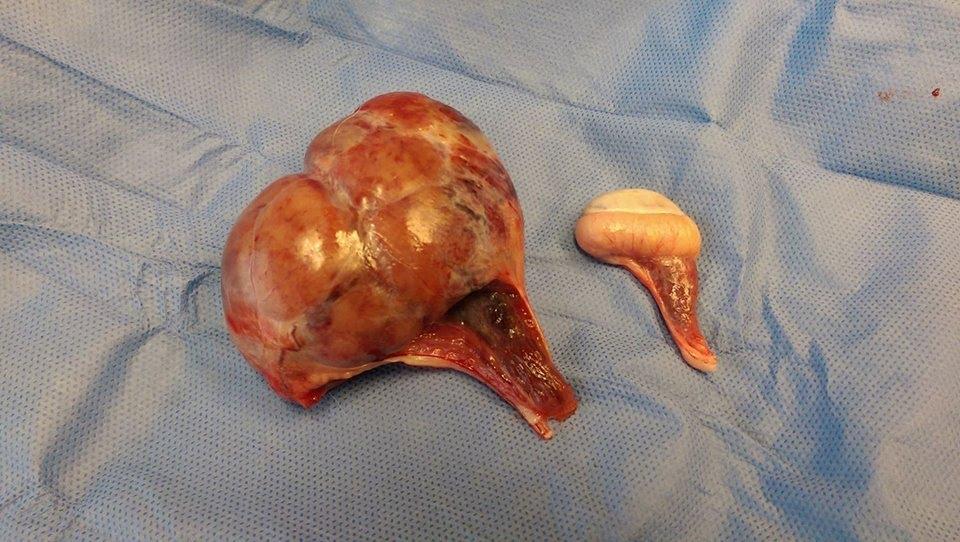 Neutering increases the risk of some joint diseases such as cruciate ligament disease in the knee (see the previous article on bitches). It significantly reduces the risk of BPH (enlarged prostate), which can become uncomfortable and at worst can prevent toiletting. Prostatic cysts and abscesses, which can be life-threatening, are also less common if neutered. If you don’t want to neuter your dog because you can’t bear the thought of his goolies being removed, remember that he’ll need a finger up his bum much more often than if he was neutered! Personally, I don’t think either of these are huge reasons for or against neutering, but it matters to some (male) people- can’t imagine why!

13 year old Murphy has had surgery for ruptured cruciate ligaments in both knees. This injury is common in beagles. 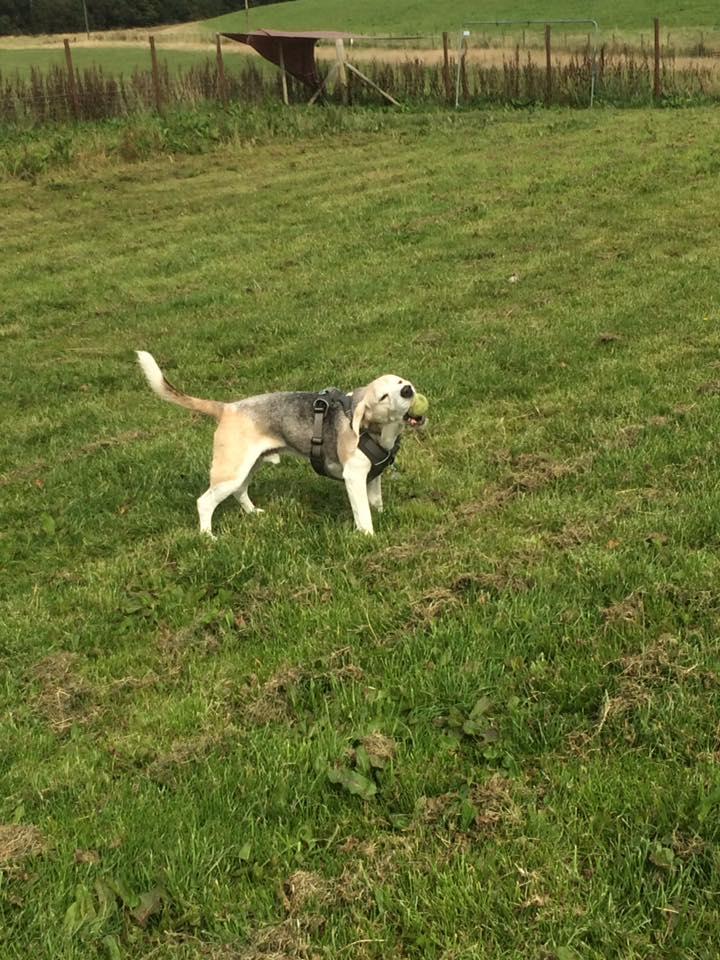 Neutering reduces the risk of heart disease, and “bloat” (a twisted stomach- uncommon but extremely serious) in males.

Immune-mediated diseases (not the same as allergies) are more common if neutered. These diseases aren’t common, but some- such as Immune-Mediated Haemolytic Anaemia- can be life-threatening.

Un-neutered dogs have weaker immune systems, and are more likely to roam to find mates, increasing their risk of picking up infections. Almost every dog I’ve seen who’s been found roaming on the road or hit by a car, has been un-neutered, and almost always male. Of course, dogs with excellent recall, a very low sex drive, or who are only walked on lead or in enclosed spaces are at no greater risk of being hit by a car than anyone else. Just to be really mean though, un-neutered males are at a higher risk of being attacked by other dogs than any other group. It’s not fair, but there it is.

What are the benefits & drawbacks of neutering in terms of behaviour? Does age affect this?

One rule I’m very strict on is that I will not castrate a shy dog. Testosterone drives confidence, so neutering a nervous dog could make him more fearful, increasing the risk of fear-based behavioural problems including aggression.

Shy Irish Water Dog Murphy became very nervous after his neutering at 14 months old coincided with his training facility closing. Vet nurse mum Jayne has worked hard to get him back on track and says although not perfect, he’s making good progress and has never been aggressive. 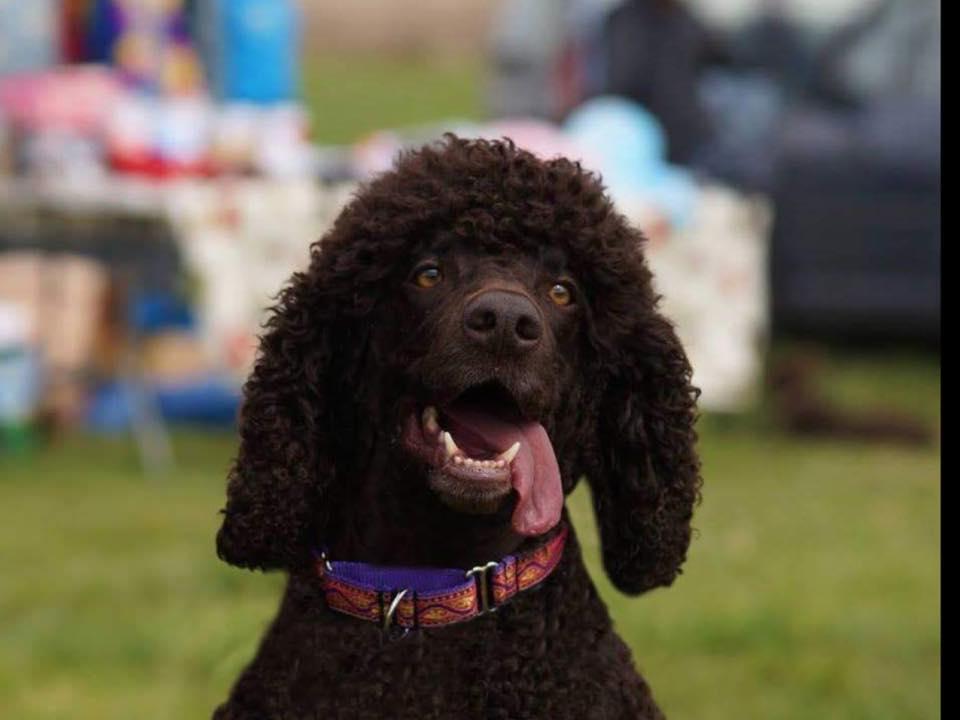 18 month old Hector is skeletally mature so neutering shouldn’t increase his risk of joint disease, but as he’s a bit shy (not that you’d guess from this photo!), mum vet nurse Clare is waiting a while before having him neutered. 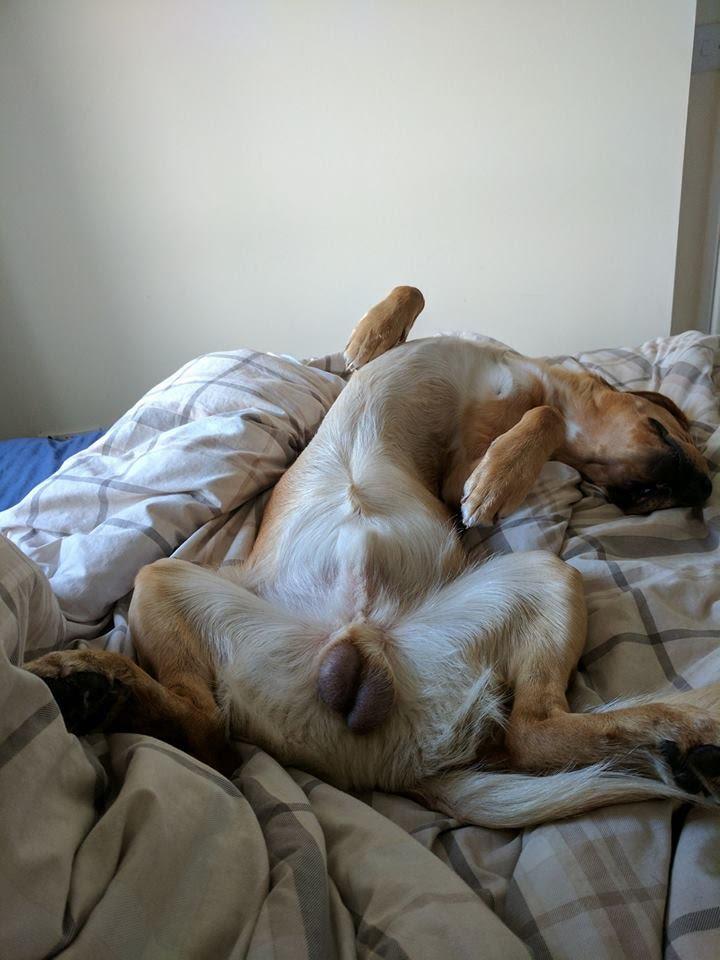 Neutering can reduce urine marking, reduces sexually-motivated mounting (remember- mounting in dogs is rarely about sex), reduces straying and digging (digging is often about trying to escape to find a mate, or in bitches it’s seen during nesting). It can also reduce some dog-directed aggression, but not aggression towards children.

Rufus had an “attitude problem” when adopted at 2 years old. In his case, neutering greatly improved his behaviour toward other dogs. 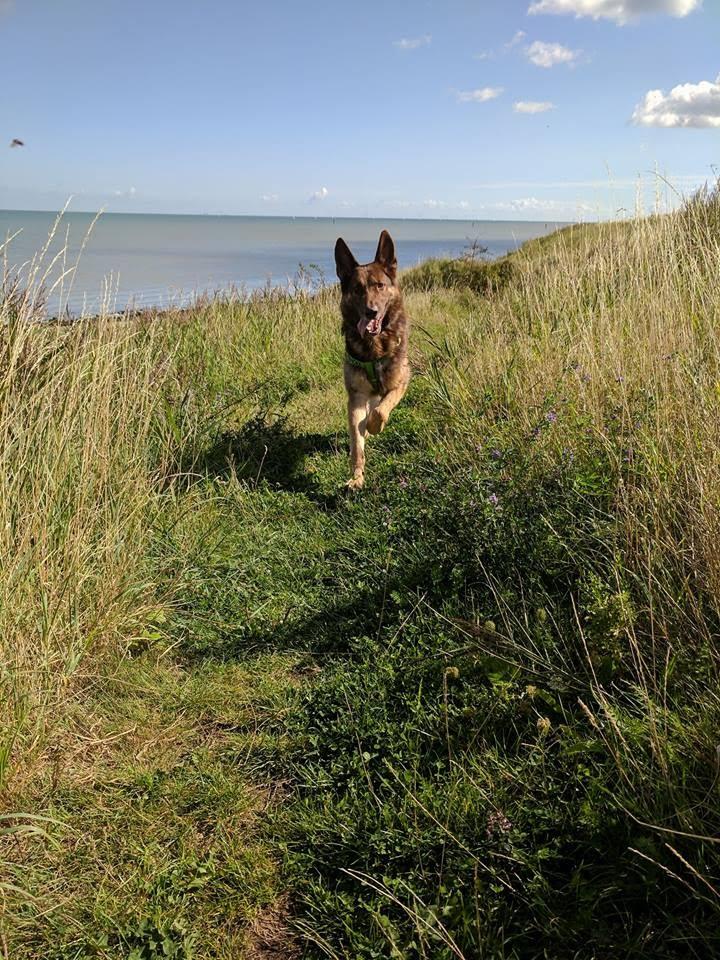 I can’t stress enough the importance of treating each dog as an individual. Ask yourself what your dog’s behaviour is like, then decide based on the evidence of how neutering might affect them. Consult a behaviourist if necessary- this isn’t a decision you can undo.

What about weight gain?

A recent survey of UK vets showed obesity is a major risk to animal welfare. Neutering increases appetite and slows down the metabolism, increasing a dog’s risk of becoming obese. But I don’t think weight should be a factor in deciding whether to neuter most dogs. With appropriate diet & exercise, any dog can be the correct weight. The exception might be chocolate Labradors, who have such a slow metabolism that I’d worry they’d spend their life hungry. Maybe the answer is to breed dogs with better metabolisms, as even un-neutered chocolate labs are often overweight.

Neutering has had no such adverse effect on (L-R) Teddy, Possum & Wombat. All are middle aged and at their ideal weight. They’re fed a calorie-controlled food so they don’t go hungry. The key is to check their body condition regularly (your veterinary nurse can show you how) and adjust the diet when necessary. 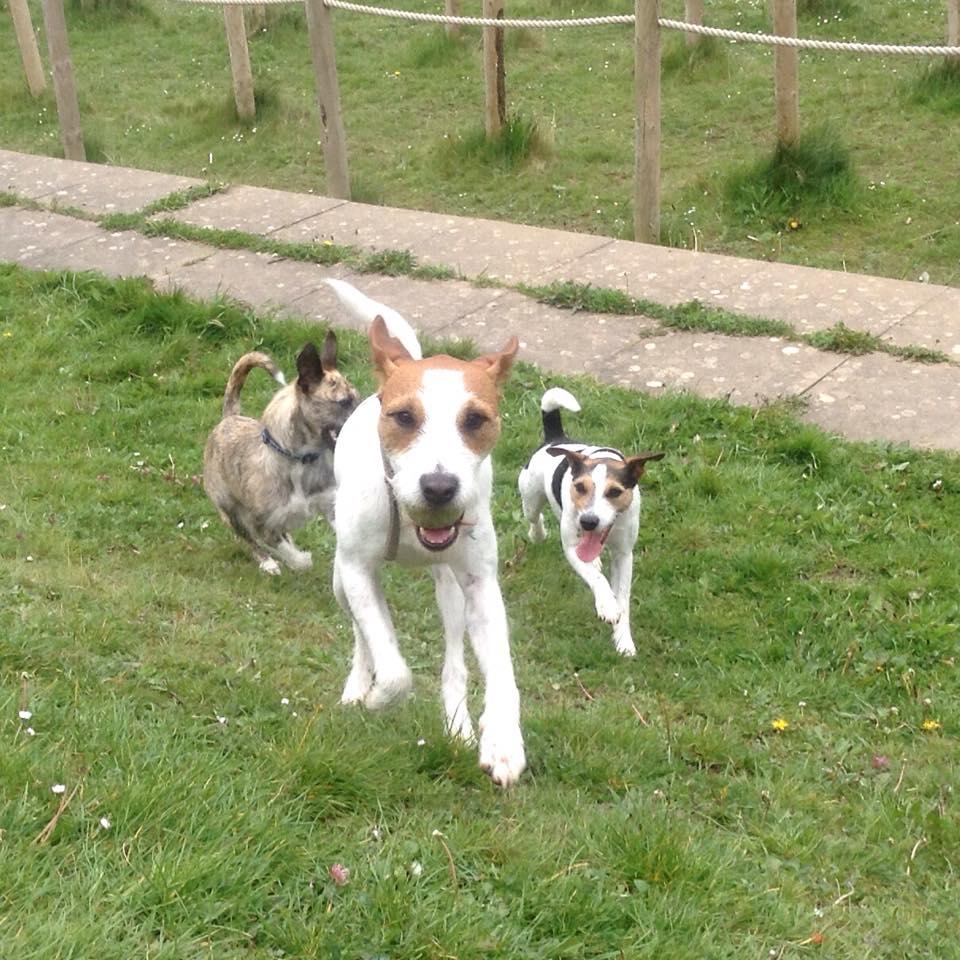 How are male dogs neutered?

Castration involves removal of the testicles via an incision just in front of the scrotum. The scrotum will then shrink with time. Complications aren’t common, but in very energetic dogs with large scrotums you might see brief swelling.

What's chemical castration? Does it work?

There are several drugs & hormones to chemically castrate dogs. The most common is a subcutaneous implant, like a big microchip. It can cause increased sex drive for the first 2 weeks, followed by a gradual reduction in fertility and sexual behaviour. Peak effect is usually from 6 weeks post implantation, lasting around 6 months. The testicles shrink, so you’ll know the implant is wearing off when they start growing again. It’s often used in gundogs intended for breeding, where risk of injury or straying during the shooting season is a concern. Many people believe un-neutered dogs work better (I have no idea whether this is the case, although testosterone is known to make animals more competitive). Surgical neutering is much cheaper in the long term.

Can dogs get STD’s?

They absolutely can! Bacterial infection of the bitch is common and causes infertility. The dog and bitch should be tested for Canine Brucellosis and Canine Herpes Virus before mating.
Brucellosis bacteria causes swollen testicles and infertility in males, and weak or stillborn puppies. It’s transmissible to humans via poor hand hygiene.

Canine Herpes Virus kills puppies if the dam has it. A vaccine is available, but is unnecessary with testing and a socialisation-free pregnancy.

Transmissible Veneral Tumour isn’t common in northern or central Europe, and is mainly seen in stray dogs. It’s caught by transmission of cancer cells during mating, causing discharges and lumps. It behaves like other cancers, and treatment is often surgery and chemotherapy.

Silicone implants placed into the scrotum at castration, to make a dog look “entire”. They’re illegal in the UK as they give the dog no health or behavioural benefit, and the presence of foreign material in the body can cause infection. I’d like to meet whoever first decided to use them in dogs, though I doubt they’d like to meet me!

Take your time to decide. If your dog gets a bit shy, hold off on the neutering. Equally it's never too late to neuter.